During the brutal suppression of the November 2019 civil protests in more than 191 Iranian cities, no fewer than 1500 of the peaceful protesters were killed by the mullah regime’s repressive forces. On top of that, some 12,000 people were arrested, adding to the huge number of people already behind bars in the country.

Under the very nose of the inhuman mullahs who rule Iran, and as a result of their concealments and appalling corruption, the Covid-19 virus has become an unimaginable human catastrophe in Iran, especially for the people held in the regime’s prisons. After the outbreak of the coronavirus tens of thousands of iranian people had lost their lives to Covid-19.

Despite the dictatorship’s withholding of factual information to the media, it is patently clear that more and more people in Iran are becoming infected with the coronavirus.
Thus there is an urgent need for immediate international assistance to the Iranian populace; however, even Médecins Sans Frontières, who offered just such help, has been expelled from the country.
For the mullah regime, human life has no value whatsoever – and this bitter reality can now be seen daily in the streets of Iran, where the coronavirus is spreading like wildfire.

Because of the overcrowding and cramped conditions in Iran’s prisons resulting from such a large number of detainees, combined with the lack of possibilities to maintain even minimal personal hygiene plus the prisoners’ weakened bodies and immune systems, this catastrophe has spread exponentially and put the lives of the prisoners in greater danger than ever before. These people have already been subjected to torture, mistreatment, and the threat of execution – now, the great likelihood of becoming infected with the coronavirus has been added to their horror.

Political captives in Teheran’s Fashafuje prison – where some 20,000 of them are being held – have gone on a hunger strike because of the coronavirus and wrote the following desperate communiqué in effort to gain their release:
“They have buried us alive here…. Our only crime is that we took part in peaceful demonstrations. It is our right to protest. But instead of receiving answers, we have been arrested and held without trial, as well as subjected to torture here in prison. All visits are forbidden and we have no way to protect ourselves. Criminal embezzlers, for example, have been released – but not us. Some prisoners have already died from the coronavirus, and we are all in danger of contracting the disease.”

We urgently ask for your help in our quest to ensure the protection of human rights!

Rather than releasing prisoners in response to the coronavirus pandemic, Iran’s religious fundamentalist regime is executing a steadily increasing number of prisoners to intimidate and terrorise the populace in the hope of deterring protests against the mullah dictatorship.

Danial Zeinalabedini (19), who was 17 years old at the time of his arrest, was brutally beaten by guards during protests in prison. His family says that Danial told them by phone on 31 March that he had been severely beaten, could hardly breathe and was in urgent need of help. His death was confirmed on 2 April.

Shayan Saeedpour was also 17 years old at the time of his arrest. He was one of the dozens of prisoners who protested in Saqez Central Prison on 27 March against the spread of coronavirus in the prisons. He was executed on 21 April.

On 22 April 2020, the religious dictatorship in Iran hanged at least 11 detainees in the prisons of Gohardasht, Kermanshah, Sanandaj and Dastgerd (Isfahan). Many other prisoners are on death row and may soon be executed.

It is worth noting that most of the prisoners in Iran today are human rights and women’s rights activists, members of religious minorities, as well as many academics, university students and young people.

We are deeply concerned about the lives and health of the prisoners, especially because of the rapid spread of the coronavirus and the fact that these people are not provided with any protection or medical care. Keeping prisoners behind bars in today’s dire circumstances is a crime against humanity.

As the free voice of these victims of human rights violations in Iran, Verein Welle participates in an international campaign for the immediate release of all prisoners, especially young people, and asks each of you – as a champion of human rights – for your moral and financial support.

Sincere thanks to you in advance! 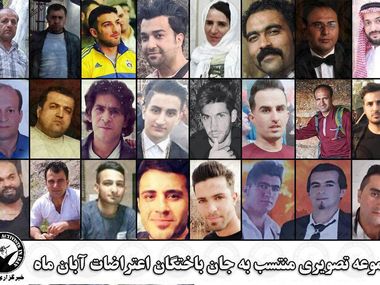